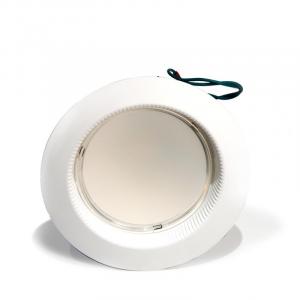 At EnergyCircle we're repeatedly extolling the virtues of LED lighting.  Eons more efficient than anything else on the market, it looks good, and is what everyone will be doing.  There is still a lot of uncertainty regarding what's available right now, and rightly so.  LEDs are on the cutting edge of lighting technology, and they're being improved every day.  Just this week Philips announced that their Master LED Bulb, a good looking fixture available right now in parts of Europe, will be available in the U.S. in July.  The University of Cambridge also made a breakthrough discovery earlier this year, finding a way to manufacture LEDs using silicon as a substrate (rather than sapphire, which is usually used to manufacture LEDs), which means that in a few years the price of LEDs could start to drop substantially.  We like the economics; the science is a little dense, but you can read about it on EcoGeek.

But even so, there is some LED lighting on the market right now that's as good as gold.  The Cree LED LLF Downlight Module (recessed light), in particular, is a favorite child of the LED world.  If you're in the process of building or renovating, and thinking of installing recessed lighting - or if you already have recessed lights and are looking for an upgrade - the Cree is a sure-fire way to impress your friends with your tech-savvy and reduce your home's energy use.  It's dimmable with the right dimmer switch, nibbles on a kid's-meal-portion of only 12 watts, and should last somewhere around 20 years.  It also has great light quality, doesn't buzz, and turns on immediately (in contrast to CFLs, which take a second to get fired up).  The Cree LED module was the grand prize winner in the solid-state lighting category of the 2007 Lighting for Tomorrow Competition, and everybody loves a winner.  So you can go ahead and think of the Cree as the Pabst Blue Ribbon of LED lights.  On second thought, don't, but it's a good light.

If you need more reasons to switch to LED lights, The Clinton Foundation recently announced plans to retrofit all of Los Angeles' 40,000 streetlamps with LED fixtures.  Which means all the movie stars will be walking around under LED lighting pretty soon... so, if you upgrade your house with LEDs, you'll basically be just like a movie star.  Furthermore, just this week Royal Philips Electronics announced that they would team up with the State Hermitage of Russia in St. Petersburg to replace the lights in the Carriage Yard (one of the museum's sites) with LEDs, a measure recommended during the museum's recent energy audit (yes, even the State Hermitage of Russia is having an energy audit).  Not to say that the Kremlin should be influencing your purchasing habits, but we can at least give the museum some credit for being green, economical and hip. To top it off, EnergyCircle sent a couple ambassadors to the Northeast Sustainable Energy Association's annual Building Energy Conference in Boston this week, where it was reported that when someone mentioned favorably the Cree Downlight in a workshop full of contractors and architects, there was an acquiescent murmur throughout the crowd: "Yes, that's a good product."  In short: good enough for movie stars, building professionals, and the Russians, and good enough for us.